History of Juneteenth
"The People of Texas are informed that in accordance with a proclamation from the Executive office of the United States, all slaves are free . . ."
. . . and so it begins, the declaration made in the city of Galveston Texas, on June 19, 1865 bringing word from Washington of the surrender at Appomattox, and of the release from bondage of all enslaved Africans. This celebration is the oldest celebration of its kind that commemorates the freedom of enslaved African from bondage in the United States of America.
The first Juneteenth occurred on June 19, 1865, when General Gordon Granger arrived in Galveston Texas and read the proclamation. This took place almost two and a half years after President Abraham Lincoln issued the Emancipation Proclamation on January 1, 1863.  It took some time for the word to spread throughout the city, but within a few short hours, word had spread, enslaved Africans dropped their tools of bondage and the first celebration of freedom began.

The festivities began on all levels. From Galveston to smaller towns in East Texas, celebrations began ranging from small thanksgiving prayer services to jubilant festive events.  The city of Galveston was said to have resembled a northern city by the almost lack of black presence in the city itself. The city's former enslaved population was with family and loved ones savoring the first sweet moments of freedom with each other.
There have been many emancipation celebrations throughout the south, celebrated on various days in other states.  The term Juneteenth itself was not coined until the 1920's. In other places in the south, the celebration is one where African American workers have actually been excused from work to celebrate the events. In Texas during the era of segregation, Juneteenth celebrants were actually allowed access to whites only amusement centers, until the inequity was pointed out to the city commission, that access should be year round, and not limited to one day.
Eventually the celebration died over the years, but it experienced a rebirth when it was noted in the 1970's that the state of Texas continued to celebrate Confederate Heroes day, and within a short time the annual Juneteenth celebration returned with not only the celebration of freedom being a focus, but also a celebration of history, and culture being at the heart of the events.

On January 1, 1980, Juneteenth became an official state holiday through the efforts of Al Edwards, an African American state legislator. The successful passage of this bill marked Juneteenth as the first emancipation celebration granted official state recognition.

Conducting Slave Era Research Part II is a continuation of the discussion on strategic approaches to finding your enslaved ancestors. A majority of the show will respond to questions from the listening audience. Listeners are invited to post questions prior to the broadcast.

Aaron Dorsey, has been doing genealogical research for over 10 years. His undergraduate degree in U.S. History and graduate degree in Education Policy is from Stanford University. He began researching his family history after reading Jubilee by Margaret Walker-Alexander for a Survey of African American Literature at the College of Alameda. He has documented the history of his family in Alabama, California, Louisiana, North Carolina, South Carolina, and Virginia. However, the focus of his research has been concentrated in Texas where he has traced his ancestors to 1839. His Texas research has been featured in the ARK-LA-TEX Genealogical Association, Inc.’s The Genie. Aaron is currently working on two books one focusing on slave era research and the other pertaining to the 1868 voter registration in Leon County, Texas.

On February 12, 2011, the Afro- American Historical and Genealogical Society, Inc. Central Maryland Chapter in partnership with the St. John Baptist Church (SJBC) Heritage Cluster, hosted an African Libation Ceremony. Libation is a ritual pouring of a drink as an offering to a spirit or god or in memory of those who have died. In certain African cultures, the ritual of pouring libation is an essential ceremonial tradition and a way of giving homage to the ancestors.
The ceremony was a tribute to our enslaved ancestors. In preparation, for the event members of the Central Maryland Chapter and SJBC Heritage Cluster were asked to submit the names, date and place of birth and death, slave owners names, and other significant information about their enslaved ancestors. The information was used to create a Slave Commemoration Scroll. The Scroll symbolized the struggles and significant sacrifice they made to their family, community and nation. In honoring them the hope is to focus the attention of the community on the importance of preserving African American heritage and on the role of slavery in American history. There were over 130 names on the scroll.
Omo Ama Safowah performed the libation ceremony in Twi and called out the names of the ancestors on the scroll as well as recognizing the names of those we will never know. She talked about their sacrifices, and achievement despite great obstacles. It was a very moving experience as the names of our ancestors were called out.
Following the libation ceremony, a pictorial tribute titled Tribute to Enslaved Ancestors which included pictures of individuals listed on the scroll, played.
The overall program was a wonderful tribute. I am sure that our ancestors were looking down on us.
Posted by Dorsey at 1:52 PM 4 comments: 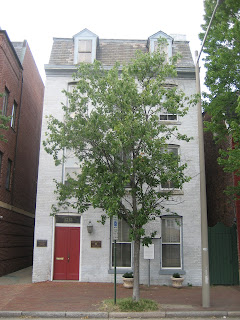 One of the nation’s largest slave trading firms, Franklin & Armfield, operated from this townhouse on Duke Street from 1828-1836. Enslaved Africans awaiting shipment to slave markets in New Orleans and Natchez were imprisoned in walled pens behind the house. At night they slept in a two-story rear wing with grated doors and windows.

For enslaved Africans in Virginia, there were few fates worse than Duke Street. “Louisiana was considered by slaves a place of slaughter,” wrote emancipated slave Jacob Stroyer. With the same sentiment, Rev. Josiah Henson, thought to be the basis for Harriet Beecher Stowes’ fictional Uncle Tom, wrote in his autobiography that the fear of being sold south filled enslaved individuals of the upper South with “perpetual dread.” 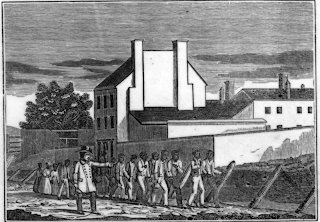 Now known as Freedom House, the Franklin and Armfield Office was started by Isaac Franklin and John Armfield. The office was known to have been the largest slave trading firm in the antebellum south. At its height in the 1830s, the firm transported between 1,000 and 1,200 enslaved individuals from Alexandria to Charleston, Savannah, Mobile, Natchez and New Orleans each year.  In 1846 the Duke Street property was purchased by a Franklin & Armfield agent, George Kephart, and in 1858 to a third slave trading firm, Price, Birch, and Co. The Adamesque structure, built in 1812 for General Andrew Young, was used to jail Union army deserters and house freed “contraband” Blacks after Alexandria fell to Union troops in 1861. In 1863 the building provided the first meeting place for Shiloh Baptist Church, founded by former slaves housed there. The slave pens were demolished in the 1870s. The property was used by the Union to imprison Confederate soldiers and was then a hospital from 1878-1885.
Posted by Dorsey at 9:35 PM 2 comments:

It has definitely been awhile since my last post. After my aunt passed away, I kind of lost interest in doing genealogy. She was my genealogy buddy who I could share my challenges and successes with - no matter how big or small. For the past few months, I have been slowly getting back my passion for genealogy.

My aunt always felt that I needed to share my knowledge and skills of conducting slave era research since I have been somewhat successful.  In addition, my good friend Robyn at Reclaiming Kin, has been encouraging me to start presenting at local and national meetings for over a year now. So yesterday, January 22, 2011, I
took the plunge and conducted my first professional genealogy presentation on Slave Era Research at the bi-monthly meeting of the Central Maryland Chapter of the African American Historical & Genealogical Society in Columbia, Maryland. 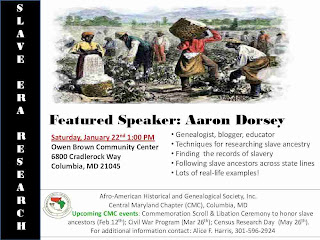 Over fifty people, from novice to advance researchers, were in attendance for the 90 minute session.  Despite the fact that the subject matter is advance African American research, I was able to provide information and strategies for everyone. My friend, Angela Walton-Raji at My Ancestor’s Name, has provided an excellent summary of my presentation including a 90 second video of me discussing several books.

The session was well received by all who attended. And all I can say is what a great way to start off the New Year. I cannot wait until my next presentation.
Posted by Dorsey at 8:44 PM 3 comments:

In Honor of My Friend and Aunt - Elaine Logwood


In honor of a dear friend and "aunt"who I shared the passion for tracing our family roots and learning about the African American Experience. Your words of encouragement throughout the past twenty plus years were a blessing and inspiration to me as  I grew from a boy to man. I want to say thank for lending me your ear as I shared my joy and frustration with life as well as my genealogical research which seem to be practically everyday. Although you used to tell me how proud you were of me, I was also proud of you and your quiet strength, courage, and wisdom.

As I sit here and type these words tears are rolling down my cheeks because you are no longer here but I take comfort in knowing that you are no longer in pain. I also know that my life and others has been enriched by your presence. 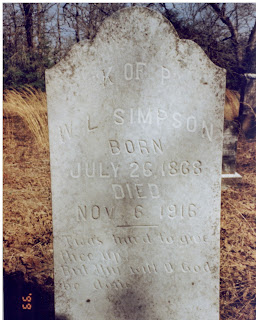 W.  L. Simpson
26 July 1868-6 Nov 1916
Moore Cemetery
Leon County, Texas
W. L. Simpson was the son of Essex and Amanda (Henry) Simpson. He was also the father of my great grandmother Iola Simpson (1897-1977). Based on the initials (K of P) it appears that he was a member of the Knights of Pythias. The Knights of Pythias is a social brotherhood founded in Washington, D.C., February 19, 1864, by Justus Henry Rathbone and four others. The Order began during the Civil War, and its founder believed that it might do much to heal the wounds and allay the hatred of civil conflict. It was the first fraternal order to be chartered by an Act of Congress. 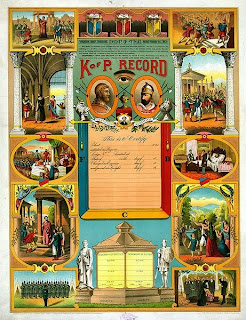